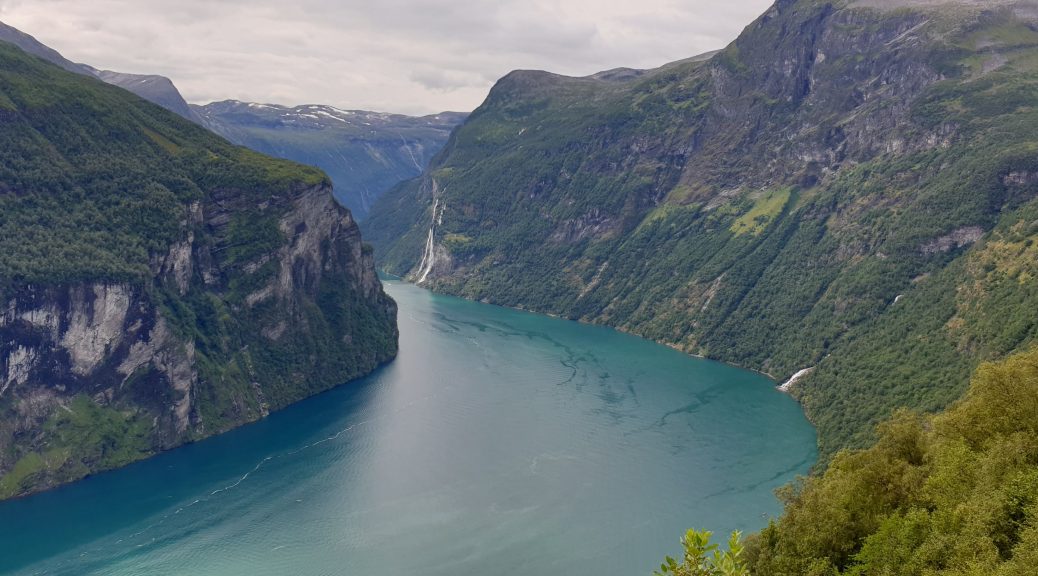 This summer we did a trip around the Norwegian fjords and out to the islands at the North West coast of Norway. Here is our itinerary from this trip as well as some tips for you who either considers or already wants to visit the North West coast of Norway to see the famous fjords and sea landscapes. We started our trip in Oslo and planned to be out on the road for about one week. I’m fairly familiar with the area as I have been visiting the North West often during my childhood, and with a guest from abroad we wanted to pack as much of the good stuff into our trip as possible. We stayed some of our nights at family cabins, but here you can easily find accomodation nearby. We added a few days between our arrival close to Kristiansund and our return, and I would recommend you to take some breaks along the way as the schedule is quite tight.

First day: leaving Oslo and head for the mountains.

Leaving Oslo we headed north on the E6 towards Trondheim. This is the fastest route getting out of Oslo and along the way you pass the main airport of Norway Oslo Gardermoen, and get to see the Mjøsa lake (the largest in Norway) as well as pass by the Norwegian constitution building at Eidsvoll and the Viking Ship ice skating stadium at Hamar. The three latter well worth a stop. North of Hamar you see the highest wood building in the world in Brummundal, and you can also visit Lillehammar, the host city of the 1994 winter Olympics. We drove to Ringebu and chose to pass over the mountains from the Gudbrandsdal valley to the Østerdal valley over the Venabygd mountain road. From Sollia you drive along one of the Norwegian Scenic Routes (we are in total seeing four of these on the trip) and take a stop at the Harald Sohlberg view point ( named after a painter) towards the Rondane mountain area. This was, by the way, the first area to gain status as National Park in Norway, and this is the point of the motif of the Winters night in Rondane painting which can be viewed at the National Gallery in Oslo (whenever they open to the public again).

Drive towards Folldalen. From Folldalen we went to Tynset and further Savalen, where we stayed at the family cabin. From Tynset it is about an hour drive to Røros, which is a former copper mining town with roots back to the 17th century, unique architecture and a UNESCO World Heritage title.

Second day: From the Mountains over Dovre to the Fjords

This day we went back to Folldalen and went towards Hjerkinn instead of driving back along the National Scenic Road over Sollia. This leads you into another famous mountain area of Norway; Dovrefjell. Along this road you find Snøhetta (height: 2286) which is the highest mountain in Norway outside the Jotunheimen mountain range and namesake for the architecture agency behind among other buildings the Oslo Opera and the new Library in Alexandria. And if the weather is clear, you can drive up to a viewing point at Hjerkinn (or you can even climb the mountain and a stay at Snøheim cabin – but then I would recommend an additional day).

From Hjerkinn drive south to Dombås and then along the beautiful Rauma valley toward Åndalsnes and the fjords. On your way down from the mountains to the fjord there are several places to stop, but most famous and spectacular is the Trollveggen (the Troll wall) just before arriving at Åndalsnes.

After pitching our tent at one of the several camping sites in Åndalsnes, we went for dinner in Åndalsnes. This is not a culinary highlight, but the town has quite a few different places and cuisines from which you can choose.

Several spectacular walks can be found in the mountains of the Romsdalen area, including a 10 kilometer long walk along Romsdalseggen. Since we were just staying the night we took the slightly shorter (3 – 4 km walk up to Rampestreken which gives a good view from 550 meters above sea level.

Third day: The Fjord of Fjords and a Glacier

Close to Åndalsnes and on the way towards Valdal and the Geirangerfjord, is the Trollstigen mountain road. With several narrow curves, water falls and an amazing viewpoint at the top, this is worth both the drive and a stop. At the top there are constructed sturdy viewing platforms so you can get a good view of other drivers snailing their way up the mountain side dodging tourist busses passing down (a slight exaggeration – the road is nowhere so scary as many mountain passes in countries with a more intimate driving style). It’s also a cafè, facilities and many parking spaces. This is also a Scenic Route (check)

After getting a pretty nice view, it’s time to drive down to Valdal to take the ferry onwards towards the Geiranger fjord. Valdal happens to be the strawberry capital in Norway and during the summer and early autumn you will see several strawberry stands along the way. Stop and buy some berries! You will need them, not only are they good, but also provides nutrition when you are queuing for a ferry

A good drive later including a ferry trip and another mountain passage, you reach Geirangerfjord. Once you arrive from the mountain, you will be amazed as you see more and more. Stop at one of the viewing points at the top of the decent down to the village for one of the best views for casual travelers (the best is probably by hike – and from the car, the two others being from a mountain plateau once you’ve left Geiranger or from the expensive car ferry you can take to Hellesylt).

The village in Geiranger is a busy place when the large boat loads of tourists arrive. The village contains a fjord centre and several activities, but the village itself is not the attraction. Get up or out on the fjord! We decided to head on towards Olden and the Briksdal glacier so we left the village in direction of the fjord centre and up the road towards Stryn. At the top, we passed a small lake (Djupvatnet – Deep lake) and noticed a road up to the left. The road is a toll road taking you to a viewing platform, and this was quite cool. On the top it was still snow, in July and another good view of the Geiranger fjord.

The road furter towards the glacier is very pretty with many nice view points. One of our favorite was in from Olden towards our rented house in Melkevoll close to the Briksdal glacier where the water clearly was colored by the water from the glacier.

You can drive fairly close up towards the glacier, and it’s a short hike from the last parking place into the glacier. They do offer guided tours on something resembling a combination of a tractor and a train, but we found that our feet could do the job without any extraordinary (or ordinary for that sake) strain. The trip to the glacier is well worth the trip, and signs along the way reminds you on how big the glacier once was. The glaciers or Norway is steadily shrinking and it is an afterthought that this may be the only time you get to view the glacier, and that later generations will most likely not be so fortunate.

Fourth day: Leaving the fjord for Ålesund and the Archipelago

Leaving Olden and the fjords inside the country, you head towards the coastline and the archipelago outside Ålesund, the biggest city in the region. Ålesund is the largest city in the Møre og Romsdal county and has a particular style as it was rebuilt after a large fire in 1904. The city was reconstructed in the style of the day, the Germanic counterpart of Art Nouveau, Jugendstil. Ålesund also have a few good restaurants, and we had good sea food and wine at the Bro restaurant. Ålesund also have a nice stairway to the local mountain Aksla well worth a hike. Ålesund is a pretty and quite unique city, so I would recommend spending a half day, if not more, in the city.

If you want to explore the archipelago, you need to head towards the sea from Ålesund. As you have to take a ferry out into the archipelago make sure to have some buffer and check the ferry times online on the travel planner. We stayed at Finnøy Havstuer, and can recommend cabins here as they are located bang on the harbour where the ferry for Ona island leaves as well as providing lovely sunset out at the Atlantic sea.

Leave the car at the harbor and get on the first ferry to Ona. We were lucky as the ferry had a scheduled pause on Ona before heading back to Finnøy. This left us with about an hour at Ona, enough to see a bit around. The local ferry visits several stops on it’s journey and once back at Finnøy we had enough time to drive the car onto the ferry (we parked it in the queue) and travelled with the ferry to Småge, where we said our good byes and drove towards the Atlantic road, another Scenic Road.

Once of at Småge, the Atlantic Road leading to another city on the North West coast, Kristiansund, is not far away. The Atlantic Road is spectacular. Starting close to Bud, you drive northwards through coastal terrain with the Atlantic coast on your left side. Close to the end, you will pass over a few bridges, where one of the bridges has become famous due to its architecture and its proximity to the sea.

The Atlantic Road ends up in Kristiansund, a fairly smaller and less extraordinary city than Ålesund, but still worth a visit. We found a good Brazillian restaurant here: Boteco. Of remarkable attractions here is to take a guided trip to Grip, which like Ona is a formerly inhabited fishing community out at sea. Kristiansund also have one of the oldest public transport routes still in operation. Founded in 1876, the Sundbåten is a small boat transporting you across the four ‘bodies’ of the Kristiansund city. Here our journey together also comes to an end. From Kristiansund our trip took us to family cabin in the vicinity. There are many ways to travel onwards from Kristiansund. You are not so far from the third largest city of Norway, Trondheim (though it’s several hours – Norway is a large country), which is the home of the Nidarosdomen cathedral as well as many cosy small streets, neither are you far from the Trollheimen mountain area with it’s spectacular nature.

Heading back from a holiday is primarily about transport as most of the experiences now are behind you. The route we chose back was the fastest road back to Oslo: The Riksvei 3 through Østerdalen. Although this road is infamous for its long stretches of endless tree scenery, there are some highlights along the road. South of Alvdal you may see the largest canyon of North-Europe; the Jutulhogget. And further south, in Stor-Elvdal, you can stop to view a gigant chroma Moose statue. As you are closing in on Oslo, you can also stop for the busiest bun-making-petrol-station in Norway, the Espa petrol station famous for their Espa-boller, a little sneak peak into Norwegian popular culture there.

I hope this can be of inspiration! Have a good trip!