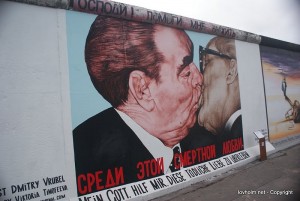 Berlin – today   it is the capital of the Bundesrepublik Deutschland, but it has not always been this way. During the last century, Berlin has been the capital of many countries. This is just one thing which makes the city so exciting.

In the beginning of the 20th century, Berlin was the capital of the growing Keiserreich, or Empire, of Wilhelm II. After it’s defeat in the First World War, it became the arena of political conflicts in the Weimar Republic. In 1933, the Nazis seized power and the city, as well as the country, entered what can be called the darkest hour of modern civilization. After the Allied and the Soviet victory of the Second World War, the city was divided within the puzzle of world history, firstly into four pieces and then in two. There were two ideologies ruling one part of the city each, which were later separated by a wall in 1961. The wall stood until 1989 and after the Mauerfall the two countries – BRD and DDR – became one.  There is no question about it: Berlin is a city worth visiting if you are interested in history.

One of the first things you should do when you get to Berlin is visit the parliament, the Reichtag. The building has recently been renovated and a glass ceiling was added to the new assembly hall, which functions as a patio from which you can see the Berlin skyline. From here you can get a glimpse of the city and locate famous landmarks. You can also borrow an audio-guide that follows your line of vision providing information on what you see. Access to the roof and loan of the audio-guide are both free.

Much has changed since the city was united, but there are still big differences between the neighbourhoods. In former East Berlin you can find Karl Marx allé that was the wide parade-street. You can follow Karl Liebknecht-Strasse through Alexanderplatz to the Museum Insel. Here you will see the Berliner Dom, erected during the empire era. Directly across the street from the Dom you will see a construction site. Here was the former Palast der Republik, now demolished to make room for the reconstruction of the Berlin City Castle, destroyed by the DDR after being heavily damaged during the Second World War.

Berlin is an economical city to visit. In general, food is cheaper here than in the rest of Germany, and you will find many restaurants where you can get a delicious meal at an affordable price. Savignyplatz and Kathe Kollwitz platz are great places to go to fill an empty stomach. The first is located in the west and the second in the east. Zwiebelfisch at the Savignyplatz is a place worth visiting, not only for the food but also for the atmosphere.

You should not leave Berlin without taking a walk down Ode 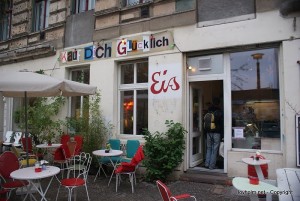 rberger Strasse in Prenzlauer Berg. Here you can find a varied selection of cool cafés, restaurants and shops, most of which are alternative. On this street is the café/toy-store ‘Kauf dich Glücklich’ (translated to ‘Buy Yourself Happy’), which is a cosy place with an interior similar to your grandma’s apartment. You will find food and drink here that will make both your mother and your dentist worried.

Berlin may be a poor city on an economic scale, but when it comes to history, culture and its general ‘sexiness’ it is definitely one of the richest.