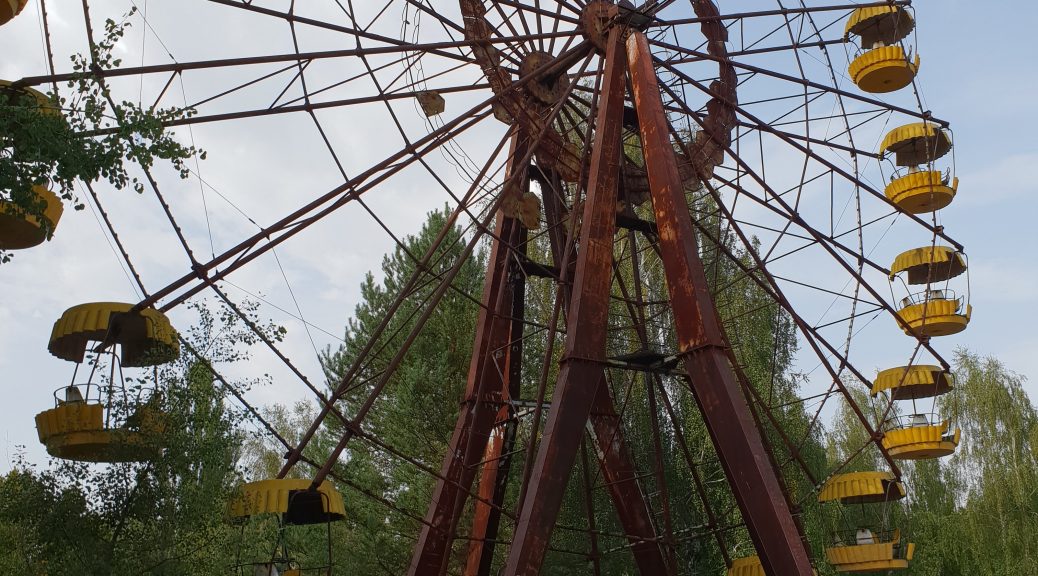 I was born in 1986, and one of the names always being associated with this year is Chernobyl. Yesterday I had the ambivalent “pleasure” to visit parts of exclusion zone: the buffer zone, the Pripyat zone and the 10K zone in which the reactor is located. Towards the end of 2017 a new shelter, or sarcophagus, was put in place over the reactor. This, together with the old shelter and the work of 500.000 liquidators after the catastrophy, makes the zone a safe place to visit for a shorter timespan, and today it’s grown an industry around taking people into the zone and show them around.

Following a test run on the reactor on 26th April reactor 4 at the Chernobyl power plant exploded sending a huge amount of radioactivity into the sky. The cloud created by the accident first blew north and then westward increasing radioactivity levels throughout the Soviet union and the rest of Europe. The accident became known in the West as radioactivity levels were picked up outside the Soviet union, but within Soviet it was kept as a secret and the consequences were played down. In fact, already on the 1st of May, a few days later, the mayday celebration in Kiev, a few hours by car to the south, went uninterrupted.

At the same time, a huge operation were initiated to get control over the fire and constant radiation being spread by the accident. At first fire men tried to take out the fire without any protective gear. At this point any direct exposure was lethal. Later helicopters were used to throw sand, clay and later lead into the fire. Still this job was leathal. Much was done; water was drained from under the reactor to avoid a fatal reaction which would leave large parts of Europe uninhabitable, in the area around the reactor villages were emptied and buildings demolished, Pripyat of around 50.000 people were evacuated and people were to never move back. Above the reactor a sarcophagus was erected. First by robots as the radiation was leathal from as little as 20 seconds exposure, but as some of the robots malfunctioned humans were used as well; bio-robots covered in makeshift protective gear. The human tragedies, still continuing to our day, was and are immense. About 500.000 people were involved in the clean up, many exposed to large amounts of radiation.

The first sarcphagous was built to last for around 30 years, the new will last for another 100 years, but this area will stay uninhabitable for thousands of years.