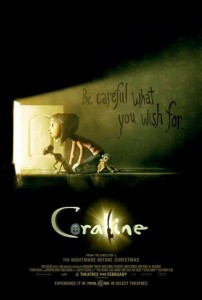 Years ago I saw the movie “The nightmare before christmas” produced and written by Tim Burton and directed by Henry Selick. I thought it was great. The atmosphere, the soundrack and also the stop-motion animations were all done with exellence and precition. Now Henry Selick has been working on a new movie, based on a book by Neil Gailman. In this movie we meet the young girl Coraline, which is moving to a house in the countryside along with her parents. She thinks the place is boring, the house is old and the neighbors are wierd. No ones have time for Coraline, her parents are to busy writing for a gardener magazine and the only one who wants to spend time with her is a young boy living with his gradmother.

One day this boy gives Coraline a doll, which is pretty simmilar to Coraline. At this moment things begin to happen. One night Coraline wakes up from some wierd sounds and follow some circus mices down to a little door. She passes to the door, and enter a parallel universe. In this universe everything is the way she always dreamt of, but there are some creepy differences. All the people in this parallel world do have buttons for eyes, and to stay in this universe she also have to give up her eyes and replace them with buttons.

The whole story is a perferct fictional story for kids as well for grown ups, but its worth to notice that the storyline can be to dark for kids from time to time. The stop-motion is great, the characters have their own personalities and the detail level is good. The movie is also released in a 3-D version and eventhough I only saw the movie in the standard format, I could see some of the places where I think the movie used these 3-D enviroment.

I will recomend this movie to people which likes a good story (who don’t?) and a good handcrafted stop-motion movie.