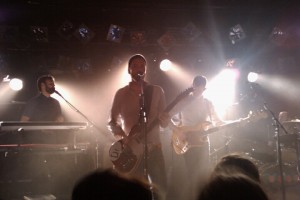 When I was in the army there was one band which I was introduced to, five years later I can still find them in my playlists and I still get suprised over how good they actually are. Now, with their new album Trespassers in their luggage they hosted John Dee, Oslo and did a very good consert.

And it is because of the music we went, and we were satisfied. Not only did the band choose some of their best song from their already extensive collection of songs, they also did some modifications and they proved that they are musicians with a long career and an enormous number of gigs behind them. With their records, their conserts and all of their joy and seriousness I really hope that Kashmir is a band, from which I can hear more. Thank for a really good consert.